The seniors were clustered together in the shadow of the Basilica of Santa Croce, and the local guide in Florence, Italy, could not contain his enthusiasm for our students.  I was afraid he might hug me.

What would be so amazing that a total stranger in a city 5,000 miles away would profess his love so openly for our students?  Simply this: our students were the guide’s first group ever who not only knew who Dante was but had read The Divine Comedy, and our seniors were interested in learning more about Dante and seeing the site of his home. 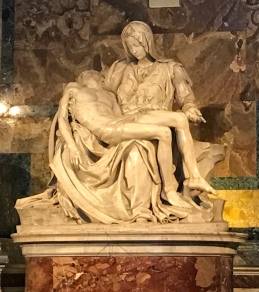 As our guide in Florence this year made clear, literacy, intellectual curiosity, and a refined aesthetic are exceedingly rare qualities in modern teenagers. It was the kind of comment I have heard from guides countless times now.

For example, our tour director, the guy who spends two solid weeks with our group leading us around Europe — a brilliant Englishman who has been leading student tours for 25 years, is a dual citizen in France and England, and speaks 3 languages fluently — has given up doing student tours with the exception of two schools: a private, catholic school from Nebraska and The Ambrose School. He refuses to lead other student tours simply because he grew tired and exasperated from dealing with apathetic and ignorant teenagers who could not stand to have Michelangelo’s Pieta or Brunelleschi’s Duomo come between them and their Wi-Fi. 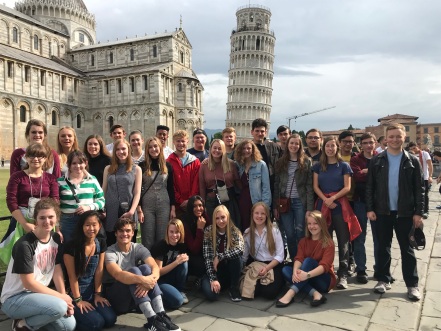 We have had a London guide, accustomed to American students, apologize that our group might be bored to tears while touring through Westminister Abbey, only to be shocked when our students were excited to  see Wilberforce’s tomb and Poets Corner.

I have seen a Rome guide joke that he took it as a personal challenge to find stories or bits of information that our students did not already know, and then rejoice when at last he found something.

Our Paris guide found our students so warm and engaging that she jumped in and joined them as they sang a beautiful rendition of the Les Champs-Elysees while driving down the actual Champs-Elysees in the rain.

Our students affections are dramatically different than most teenagers, and it is never more apparent than when we are out on tour with people who have made a career out of working with young people. The local guides quickly recognize in our students something rare and refreshing: our students appreciate and feel inspired by good and beautiful things whenever they encounter them.

Lewis wrote those words almost 75 years ago. With the rise of the Digital Age and the destructive influence of social media and video games, and all the distractions that accompany them, the situation has not improved. But all is not lost. Much of what we do at The Ambrose School is done to awaken our students from “the slumber of cold vulgarity” that Lewis spoke of. There is an intellectual curiosity latent within Man as created in the Imago Dei, a love of learning, and an affection for things beautiful and praiseworthy that simply needs inspiration to awaken.  We hire life long-learners with a passion for the liberal arts to teach, we read great books and guide our students into deep discussions, our classrooms are full of beautiful art and music, exposed wood and wrought iron, and we take our seniors on a 12 day tour of Europe, all with the express goal of inspiring within students a love for the goodness and beauty in God’s creation.

The comments of local guides on our Senior Trip — strangers from far-distant lands who know a thing or two about teens in the 21stcentury — are evidence that irrigating deserts still yields a rich harvest.

Night 2 of the retreat. Students are simultaneously exhausted and euphoric: they’ve had too much sun and too little hydration; they’ve played too hard and stayed up too late; and they’re far from home at a mountain lodge, sitting under a starry night listening to the best storyteller on our staff masterfully spin his tales.

All the above is pretty normal at our annual House retreat, but this year, something new happened. Student leaders approached Mr. Tucker and Mrs. Francis, our House governors, and asked if they could hold a voluntary, additional chapel service for interested students on the last night of the retreat. Mr. Tucker asked my permission, which I granted, fully expecting the elective chapel service to be poorly attended for all the reasons listed above.

Forty students ranging from 7thgraders to seniors gathered in the chapel and sang worship songs together and prayed for one another, their families, their friends, their teachers, and the coming school year.  Mr. Tucker felt led to exhort the students in a particular way, encouraging any student in the crowd who might be on the fence about their faith or might be a cultural Christian, someone going through the motions just because their family or friends were Christians. Mr. Tucker encouraged students to seek God because He is good and all-satisfying.

Mr. Tucker’s exhortation struck a chord and students responded in a powerful way. Students felt a new freedom to seek God, and many were transformed as a result. For example, one student leader was praying for some students she had been mentoring; afterwards, as she was on her way out of the chapel, she saw her younger brother, who had attended the chapel without her knowledge, sitting by himself in the back. As she approached him, she noticed something was moving in him.

When this older sister, who had been praying for her little brother for years, sat down next to him to give him a hug, he unexpectedly burst into tears.

“My whole life I have believed in Jesus,” the younger brother said. “But now I feel God’s love in a new way.”

“That’s the Gospel!” his sister replied. “Jesus loves us perfectly, and when we accept it, it changes us!” The older sister and her brother prayed together, and the two were bound together in Christ, a hundred miles from home or church or school. However, the changes didn’t stay a hundred miles away; according to the pair’s mom, the younger brother has been transformed. While still a teenage boy, he is a new kid at home and at school, full of joy and sincerely following after Jesus daily.

This is just one of many treasured moments that made retreat this year our best yet (full disclaimer: my daughter tells me I say that every year, and she’s rarely ever wrong when it comes to her memory.)

All joking aside, this story of a teenage girl and her little brother is a great illustration of something unique about classical Christian schools like ours. As a classical Christian school, our primary goal is the formation of the soul; everything else – literary analysis, the quadratic formula, Newton’s laws, etc. – is secondary to this. If our students leave here able to argue articulately and persuasively, of if they can isolate a variable or balance a chemical equation, that’s great; but education can and should be so much more. It is our goal that students will leave Ambrose having encountered the Living God Who alone satisfies and gives life purpose, that our students will love the things that God loves and they will influence the world around them for Christ as a result, and that they will see God working in their own lives and cling to His promises no matter what trials life might throw at them.

That is soul formation.